It would be a lie to say that I didn’t know the dead man, but it would be the truth to say I can no longer remember his name. Too many nights filled with foreign smoke and strong drink. Too many days scratched away listlessly. But I know it’s still down inside me somewhere, being chewed up and digested again and again.

It’s been buried so many times, on the tip of my tongue in the pitch of nightfall, but never fully exposed. Maybe it will surface one day, as these things often do, when least expected.

I have wondered why I forgot the name. Before his death he was someone I saw a lot—you couldn’t say I knew him, but he was definitely a constant. We worked at the market for a couple months anyway. A friend of mine said it best over drinks, as we sat next to a shelf of nameless corporate nobodies at some long-forgotten bar in the legal district: it’s easier to forget a face that wants forgotten, he said. That was at least five years ago—my dog didn’t get hit by the bus yet, we had a president worth having, I had more hair. My god. What is five years but an endless and terrifying chasm that has the potential so suck away your very lifeblood?

Both he and the dead man now share a common denominator: both absent from my life.

END_OF_DOCUMENT_TOKEN_TO_BE_REPLACED 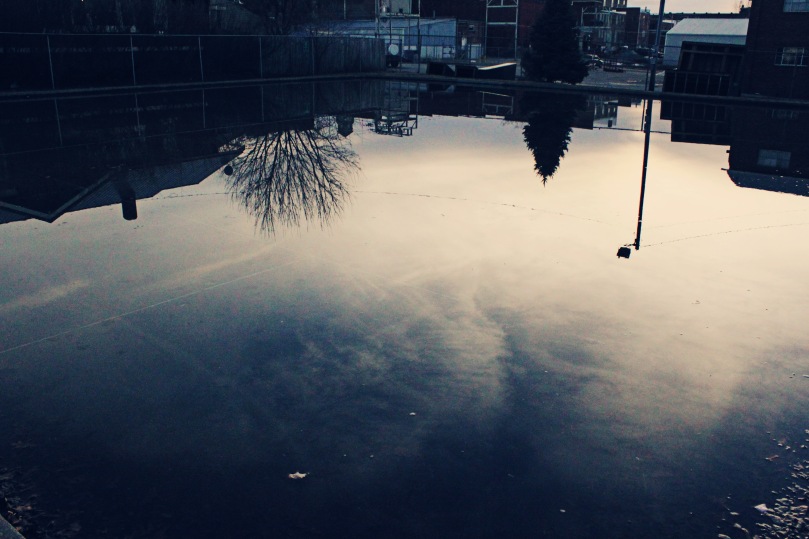 The spine unhinges when detached from the ligaments that bind it. How naturally a resting body lies on the damp earth, uninhibited. An alarming sense of reanimation, the way wisps of hair catch enthusiastically on the wind or an ant parades up a thigh thick with nutrients for the taking. Laced to the ground through a weave of decay – no longer human, just naked skin pulled tightly to bone. Such intimate moments – a disconnected arm, torn by a fox who slipped under the fence of the enclosure, grasping onward against the pull of time; the stomach of a fresh specimen, bloated with gas; a decomposing face blackened with sunburn.

These are the details of death. Within decomposition hides the incontrovertible fate of all humanity: if left to sit, we rot away to nothing but a cloying stain on the forest floor. We are picked apart and reused.

END_OF_DOCUMENT_TOKEN_TO_BE_REPLACED

Legs were connected like tree roots, jutting in and out from the snowfall of bedsheets. Pale and dark roots that had come from two trees turned one. One dreamed of the other, his hands subconsciously tightening their grip around Rhys’s bicep, “a little on the small side, but I make up for that elsewhere,” he used to joke like some kid on the playground who had learned about sex too early from his older siblings. Aron would look up at him and retort with something like “where? Not up here, clearly,” tapping his head. “Well, I do have more than one head, you know.” The jokes would continue until they were breathing each other’s air, sharing that casual, almost lazy sex that had been expected of them their first summer in Pasadena, with the heat index doing their poorly constructed AC unit no favors; it wheezed in apparent rheum, which masked their lovemaking in a veil of machinery and the smell of ruined industry.

END_OF_DOCUMENT_TOKEN_TO_BE_REPLACED

As the door clicks shut, I am spitting the chewed remains of a stick of gum from my mouth onto the grass, an attempt to purge all my emotions in the mangled wad. There is a body still breathing heavily behind the door, in the dense and stagnant air of the apartment. The body still damp with sweat—I can see it, feel it, even now, as I walk to my car.

I counted the numbers on the doors all the way to forty while savoring the taste of fresh peppermint gum. This was all too new. Breathe. A line of four dark windows stood between apartment forty and forty-four. As I walked past two of the black windows, I heard the door click open ahead of me, as if whoever was there was waiting, watching through the thin curtains. The screen bobbled for a moment, indecisive. I walked past, acted casual. It opened wider and I reached for the knob. A dark hand pulled the storm door open and I stepped over the threshold like it was supposed to happen naturally.

END_OF_DOCUMENT_TOKEN_TO_BE_REPLACED

To YOUNG ONE, Dead on My Roof

The drive home is a rabies shot, agitated,you twitch from state line to county lineto places in between,the coordinates slipstream daydreams —You remember the road numbers:145th, 194thimpossibly lengthy, made of pulverizedbonemeal and crunch coat,those steel-cut graveled byways You remember the inhabitantsrendered from bacon fat and ham hocktourniquets and night shift salt licksOr those pubertied boys…

Feeling inspired by Etgar Keret lately, so I wrote this. Thanks for reading! I wasn’t sure what was happening. The tears didn’t feel natural; they were not the tears I had cried the day before, at least. Yesterday’s tears were shed so freely, so deep into the stacks that I might have been all alone,…